Skylanders University is an upcoming flash film of Skylanders made by Black Rhino Ranger (BRR for short, BRRGames on Youtube and BRRSpore on Wikia). This movie is a Skylanders version of a Disney film, Monsters University. So far, Part 1 and a preview of Part 2 have been made.

Pop Fizz's Mom goes out shopping while Pop Fizz is in charge of the house. He questions to himslef why not many people liked him. He then tried to make himself look charming but instead it turned him beastly. However, the effects were only temporarily (except the nails were permanent) as his mom didn't know any difference (except for his nails). Pop Fizz then watches an advert about Skylanders University and decides to join it.

After the bus drops them off, the driver warned the passengers that the bus was about to self destruct. The passengers survived (Pop Fizz and LizLaz) and Pop Fizz heads into University. He gets his ID made and tries to join in a University Club. He decides to join the Skylander Temple Games but he had to register his element before he could qualify. He was chosen to be a Magic Skylander which didn't go well at first as the magic roster was full (until it was revealed one of the magics was disqualified). Pop Fizz was then accepted in the games but was put into a team that didn't sound like a great team to be on. The SNOT Team.

Pop Fizz arrives at the fraternity house of the SNOT Team. He was eventually welcomed by the team (Although there were a few not-so friendly greetings). Pop Fizz was also curious about the rival teams. Drainstorm decides to invite him into the house.

In the house, everyone was introduced (and a few whoopee cushions were used). Pop Fizz worries that Groupee Cushion's pranks would go too far. Eventually, the guards of the University place Groupee Cushion under arrest and tell all the students to attend the court (which was really made for those who want to be lawyers)

KIND (Kannibalism In No Discomfort) 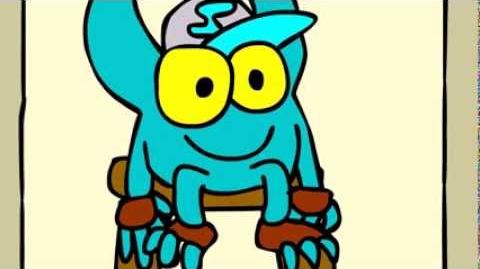 Skylanders University Part 2 Second Half (Flash Movie)
Add a photo to this gallery
Retrieved from "https://skylanders-fan.fandom.com/wiki/Skylanders_University?oldid=72858"
Community content is available under CC-BY-SA unless otherwise noted.