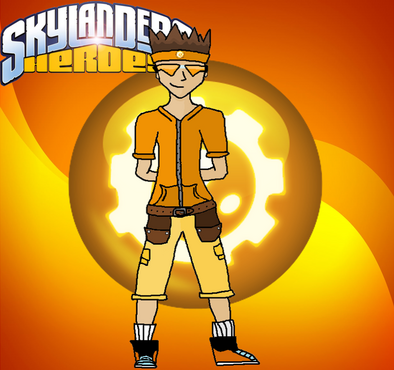 Brad (short for Bradford) is one of the main characters of Skylanders: Heroes, serving as the Elite Master of the Tech element.

Brad appears as a Caucasian male in his early-teens. He wears an orange hoodie, tan cargo pants (which he prefers to be rolled up), and orange and black shoes. He also wears an orange headband that represents his element. Occasionally, he will wear his signature triangular Tech shades, which have more functions than simply looking cool. He also has brown hair that stands up. One more important part of his apparel is his tool belt, which helps him carry all of his small equipment around.

Brad is obviously the smartest member of the group. He is usually seen working on new inventions for the heroes to use in combat. Despite being good-natured, he does have a short-temper whenever he runs out of ideas and he can become very sarcastic if someone asks him a ridiculous question. Though Wordsworth and Miles bug him with their antics, Brad knows how to have fun when the time is right. He is surprisingly humble, and makes sure not to make others feel lower than him, even though he knows he is smarter.

His love for technology does not stop him from enjoying the outside world. He often takes nature walks or rides his bike, searching for inspiration and adventure.

Daniel - Brad is best friends with Daniel and serves as his second-in-command. He looks up to him as an excellent leader, though Daniel does not usually act like he's better than him. He spends most of his time chatting, laughing, and having fun with him, while still finding time to work on his machines.

Wordsworth - Brad often tries to avoid any interaction with Wordsworth unless it's something really important. The two get along fine, but a large portion of Brad's days is spent building, and he knows he cannot trust him in his labs. Despite this, he is still a part of his main group of friends.

Miles - Just like Wordsworth, Brad does not interact with Miles that often. He generally tries to ignore him, especially when he's off pulling pranks with Wordsworth. However, he does still respect Miles as a person and does not go out of his way to be rude. Two things Brad does respect about Miles is that he is a vegetarian, just like him, and he is also the only one brave enough to be his test subject for his experiments.

Sue - Though they do not hang out that often, Brad sees Sue as a close friend and an admirable person. He is usually around her when he has other friends by his side, as she is a big part of the group. Sometimes, he may feel a bit jealous towards Danny (her love interest), though he only sees Sue as a friend and doesn't have any romantic feelings for her.

Clay- Brad does not particularly respect Clay (mostly due to the latter being a Brony), though he is quite aware of the fact that the guy could punch his face in if he wanted to. Always making sure to stay on his good side, they engage in competitive sports pretty much daily.

Mike - Mike is easily one of his closest friends. Brad, being a vegetarian, does not enjoy Mike's hobby of fishing and trapping. Still, he looks past this fact and they get along quite well.

Ricky - The two respect each other and enjoy discussing various topics. Ricky usually leaves him to his work when he knows it is important. Unfortunately, Ricky can quite often become disinterested in or even unappreciative of Brad's inventions.

Yurei - Brad almost never talks to Yurei. He recognizes him as the emo of the group and lets him be. Sometimes, he may get uncomfortable just being around him.

Professor Tanium - Brad first encounters the professor in Woodburrow, where he soon becomes his apprentice. Together, the two geniuses always work hard to create new inventions to help protect Skylands.

Mags - Starting in the second book, Brad will often be seen around Mags and will sometimes act strange around her. It is currently unknown whether he has feelings for her or if he simply admires her work as a scientist.

Will be added to soon.

Retrieved from "https://skylanders-fan.fandom.com/wiki/Brad?oldid=51217"
Community content is available under CC-BY-SA unless otherwise noted.