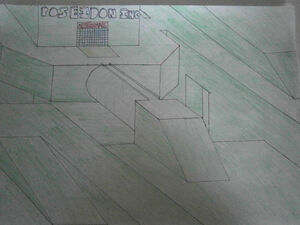 This section contains spoilers in Skylanders Psychics and Skylanders Dualement Army main campaigns. 500 years after the time of the Giants came the mysterious founder of Asemetro who had come to study the Arkeyan technology. When he had gathered enough information he had gathered his fellow Portal Masters to build a vast metroplis. The construction took 5000 years, so it was continued other many generations. Although the mysterious founder lived through those 5000 years and was romoured to still be alive today, he has not been seen since the constuction ended. Residents say he moved on to a bigger project but to them it had become apparent that he was dead. This was until Master Eon had stated that he knew the founder personally. He told the citizens that he was pretty generous and he was studying Traptanium and how he could make a Traptanium City in the middle of the Dualeverse, but then said that he had not seen him in three decades. The Asemetro Police Force (APF) Took some Skylanders into the Dualeverse to search for their founder, but found an evil greater than Kaos- Mysto, Mysto had previously been seen in Asemetro Surburbia with a sceme to sneak into the main city but this time had gathered Hektor, Captain Frightbeard, Count Moneybone and Dream Sheep to set a nucler bomb in Asemetro. From the Dauleverse, Mysto Disrupted all broadcasting in Asemetro City said that he had already put the bomb somewhere in the city. With the Psychics holding Kaos captive in Asemetro Prison, he is broken out by Count Moneybone, although Count Moneybone was defeated by the Skylanders, Kaos escaped. Count Moneybone was trapped in an Undead Trap. Moneybone takes Snap Shot and the other Trap Masters to find were Mysto was. Along the way they find the Doom Raiders (Trapped) Reporting that they had seen Kaos untrapped in Asemetro. The Omniment Generals of Water, Fire, Magic and Undead confront Koas at the Timekeepers Tower in a clockwork engine room finding out he captured Rizzo and Blobbers. Eon asks the Portal Master to summon some Skylanders and is given Ninjini, Short Cut, Drow Blow and Hit Strike. At the end of the battle, a giant metal ball bursts through the giving Kaos an escape chance and unlitmately killing Rizzo. When Ninjini asked where Blobbers was, it became appearent he had gone missing. Rizzo manages to get some last words out before passing. News got out that Heli Hacker and Blastermind Trapped Captain Frightbeard, as they were going to commence putting the real bomb in Asemetro, unfortunately they didn't stop the ship from taking off. Since it would take a few days to get the ship out of the Dualeverse, the Omniment Generals take all 100 Skylanders Hired in the Dualement Army and to the Dualeverse to take down the ship down. Hektor invades Asemetro City taking out a chunk of the Skyavator. Noticing Hektor was a lot larger than usual, the APF calls in the Psychics, Trap Masters and SWAP Force along with several non-Dualement cores to take him down. Like the battle in the Dualeverse preventing the ship from arriving at the Dualeverse, the battle was intense but they eventually won the battle and trapped Hektor with a Magic Trap.

Asemetro has no set location in Skylands as it is always moving to avoid natural disasters such as massive toranados that could cause damage (As state in a story scroll found in level 2 of Skylanders: Psychics). The city has two levels the Lower City and the Upper City, which the upper is "floating" roughly 5 kilometres above the tallest building on the lower level. The Upper City has strong glass roads supported with metal bars, that you can look down at the lower city thousands and metres down. The Upper City is supported by 4 massive columns in each corner that are made of the strongest subtance in Skylands, there is also the ginormous Elevator Tower the connects the two city levels together.

All Buildings in Asemtro are olive green coloured with the execption of some buildings. All of the buildings are at least 1000 metres (3280 feet) high meaning they are fairly tall.

Retrieved from "https://skylanders-fan.fandom.com/wiki/Asemetro_City_(PoseidonR_Pshychics_Universe)?oldid=51906"
Community content is available under CC-BY-SA unless otherwise noted.